Effective April 18, 2022, we’re offering another storage type, extra-large, in addition to the oversize storage type. This new storage type gives you more flexibility in how you manage your inventory and quantity limits for larger items.

Your FBA quantity limits will be determined separately for extra-large items and oversize items. This determination will be based on your past and forecasted sales, adjusted by fulfillment center capacity.

If you have existing inventory that qualifies for the extra-large storage type, this inventory will be reclassified automatically as extra-large. No action from you is required.

For more information, go to Extra-large FBA inventory. To see which of your inventory qualifies as extra-large, check the dimensions of your items in the Monthly Storage Fees report.

Your current limits, or maximum inventory level, and usage are shown in your Inventory Performance dashboard and Shipping Queue.

I am actually surprised they are not selling cars yet

Why so suddenly?
I did not know about this change until now.
I have almost 20000 retock limited for oversized inventory before but now I have only 1770 retock limited for extra large inventory.
I order so many incoming containers for retock and they are all comming in. Not I can not send them to FBA center as planned.
What should I do? Please help.

I simply don’t understand what’s Amazon is doing. I’ve sold so many large items and all of a sudden they give extra large Maximum inventory level limit to ONLY 6. How can I run business?

Anyone know how to pull a report that shows which items Amazon has classified as “Extra-large?”

All we sell is Extra-large items.

I spent over 2 years trying to build up my oversize storage size stock limit, now my only ASIN in that category is in Extra large with a 1000 stock limit which means I no longer have enough space to continue business for this item. I tried contacting seller support but as usual seller support is completely useless and has no solution or knowledge of the issue. Please work out a solution ASAP. I’m getting very tired of Amazon introducing programs/“solutions” saying “wow we are here to help you!” when the entire program is a detriment

For more information, go to Extra-large FBA inventory. To see which of your inventory qualifies as extra-large, check the dimensions of your items in the Monthly Storage Fees report.

This is absolutely ridiculous. 50 lbs and over is Extra Large?
I just sent in 94 units of 2 items that all weigh over 50. These were sent in and DELVIERED MARCH 3. Shipped over 2 months ago.
They JUST started “receiving” them on April 20th. almost 2 months later, now all the sudden every single one of these items is moved over to extra large with a limit of 6. And of course every single unit just went to FC transfer so theres another month of selling none of these.

What, are they now going to force me to remove all but 6 of them after they were sent in 2 months ago? Who the hell came up with a limit of 6 items for anything weighing over 50 lbs.

MY oversize limit is 2,578 and you change the extra large to 6 ?
How does anyone in the world come up with that calculation

Same here. Amazon, please hear us! This sudden shift has really hurt the supply to you. Our limit on Extra-Large isn’t reasonable in my opinion. Now, the “oversize” has a huge availability because we don’t have any of those items. I suggest you get a total cube to work.

I hear you and feel your pain. 50% of my revenue comes from what is now “extra-large”. But, the limits are 10% of what they used to be. Inbounding will become more expensive for me since it’ll be smaller, more frequent shipments (which is probably what Amazon wants) and I predict I won’t have enough in the pipeline at any given time to actually be in-stock at Amazon given their slow receiving and transfers, etc.

AMAZON PLEASE LISTEN. THIS IS INSANITY.

My restock limit for Oversize is 5,000. Now my limit for Extra-large is 1? ONE unit? 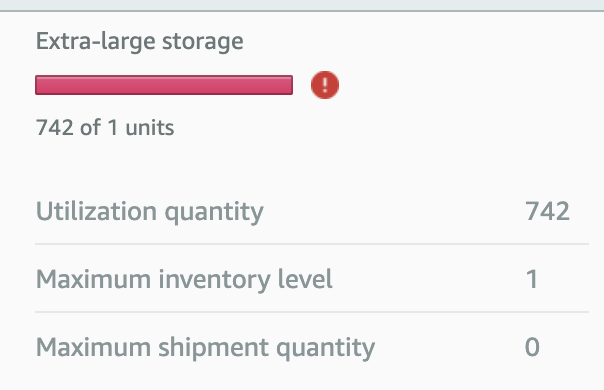 PLEASE LISTEN TO YOUR SELLERS. THIS WILL HURT OUR REPLENISHMENT.

SELLER SUPPORT is NOT helping. Getting a canned reply.

Who makes this ridiculous decisions at FBA?

We are a small shop with 1,000 oversized limit. Extra-large started with 50, and now it’s at 1. Of course, we are now many many multiples over utilized in extra-large. 1 is obviously not a doable number. Even with the initial 50, it’s very dicey because it can take Amazon weeks to receive LTL shipments. I can understand warehouse space is precious, but throwing us this new extra-large storage type with ludicrously low limits is just so ham fisted. Even with our small operation, all we can do is looking at it with our mouth agape. It’s just not workable on our side. I can only imagine what kind of havoc this might cause others with larger and more complex operations.

Please read our comment we need support ASAP. We have hundreds of thousands of dollars in inventory we now cannot send in

Same here. I ordered 4x40HQ of shipment for the upcoming prime day, and due to this insane change of Amazon, they got stuck on the way and can’t be sent in… we are in desperate need of assistance…