I agree, they’ve done this for years.

The scan forms are great and useless at the same time. If they never scan it at any point and lose it they swear you never sent it. I have had many packages that never scanned until delivery (or at all if they lost it) which caused several refunds, then weeks later it would show up.

And if it was lost prior to any scan they refused all responsibility and would tell customers that asked that you never actually shipped it.

If you cancel an order don’t use a scan form for that day or you won’t be able to refund that label.

I use stamps.com. When I am done creating labels I go to history and select all the labels for that day. Then at the top of the History page I click Create Scan Form then select Selected Packages. Then it creates the form for you and you click PRINT when the print screen pops up. From that History page you can then click Schedule a Pickup from the top. Surely simplified my life when I learned how to do this.

This has been SOP for months at this point. Union reps are just slow to getting the word out to all of their members. We were notified in June of this year when the new carrier strait out told me he only had to scan 5. Now we just print scanforms for each sales platform, hoping no package ‘falls off the truck’ until it gets a real scan.

Pirate Ship is Way better than Stamps.com And is Much Cheaper!!!

Use ShipStation. All you have to do is print end of day then the driver only scans the 1 end of day form and BAM! done.

Thanks, but I think I have it figured out on Amazon.

So, apparently, there are at least a half million of us that set foot here

The USPS just instituted a new policy of only scanning 6 packages and then picking up the rest to be scanned when they get them to the Post Office. I let them know that I have a problem with this policy because we have between 30 – 40 packages going out a day and I really don’t like them not being scanned as picked up. Apparently this is a nationwide policy due to personnel shortages and Covid. When I called our Post Office they told me that I can create a Manifest which would list all my packages and then creates a single Bar Code which the carrier scans which records all my shipping labels.
This sounds good but the Postal Chief couldn’t tell me where to go or how this manifest is created. To make a long story short – does anyone know what they are talking about and if so how or where do you go to create this Manifest???

This is not a new policy. USPS has refused scanning every package for us for many years and will only accept scan sheets or wait until they are scanned at the USPS. Your post office was just going above and beyond for you.

The only down side is that the USPS does not consider a scan from a scan sheet to mean they physically received the package. It just means they scanned a sheet that tracking number was on.

Which is undoubtedly several million TOO FEW!

Of course, ignorance is bliss – right up until it isn’t…

I use ShippingEasy which is integrated with Amazon. They make it easy to generate a SCAN form at the end of the day.

Same experience here. This is exactly why the USPS has so many issues with profitability. Our local PO refuses to do pickups at all, and they refuse to take packages at the end of the day - yet they want our 300k a year in shipping of course.

How often does this report update? I get orders all day long and would like to know what’s included in the scan especially if it only updates every several hours.

When you hit “Generate” that will provide a form of every label created for the day up to that moment.
What you are now seeing are previous days forms.
If you did not generate a report or there were labels purchased after you generated the form then Amazon starts over at the end of the day.

Ah. So that’s how it’s done. I never realized I could get updates for the morning’s shipments in real time, and didn’t want to use sheets that weren’t complete. Shoulda figured that one out but didn’t.

So thanks OP for bringing this up!

Update. I presented my carrier with 3 of the PS Form 5630 generated from the end of day forms and low and behold her scanner would not accept the scan codes. She scanned the boxes I had and also took a picture of the forms back to her office to show the Post Master. So I forwarded forms to their business solutions guy and he is supposed to get back with me as to why they won’t scan. Will let you know what’s going on. I hope this can be worked out because it makes it easier for us all.

I presented my carrier with 3 of the PS Form 5630 generated from the end of day forms and low and behold her scanner would not accept the scan codes.

If you are presenting previous day forms in which the packages have already been scanned as being in possession of the post office then this will happen.

Thank you for this! 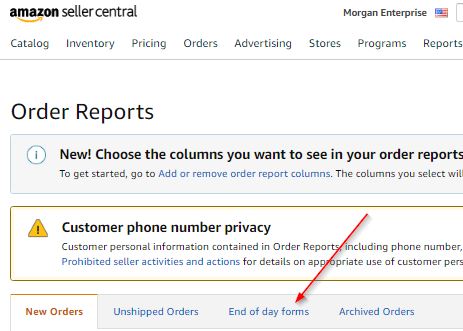 Select “Request Now” if you want today’s report. If you want a different days report, then click the download link to the right of the date you need. 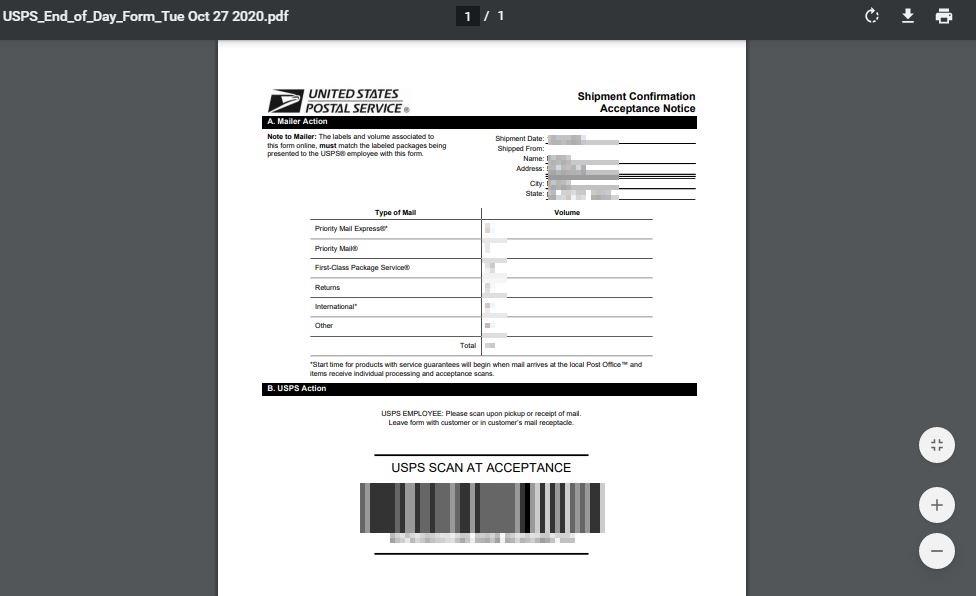 Update. I presented my carrier with 3 of the PS Form 5630 generated from the end of day forms and low and behold her scanner would not accept the scan codes.

You may have the problem I do. Only my main carrier actually knows how to change her scanner setting to scan forms. If anyone else picks up they are clueless & SF won’t scan.