Update to Amazon US referral and FBA fees: Effective June 1, 2021

First impressions: This is as bad as the change from 2016-2017. Nothing benefits the seller. Amazon will generally get to charge 50-100% more in fees we are already experiencing. Amazon’s stimulus to their sellers last year was to give a 1 and a half month loan delay, that’s it.

Even though we have all suffered from problems with the post office during covid, told we would be reimbursed, and then MANY of us have been denied for past promises Amazon made to protect their sellers during the worst pandemic in Amazon’s existence. Now we are expected to foot fees just so they can continue to accelerate their profits. But this isn’t the case for the sellers, they are simply finding new ways to drain those profits and now restrict almost any listing from hitting Amazon.

Part of the problem is when Jeff started selling books out of his garage, I’m pretty sure he didn’t have to go to company’s to ask them for permission to sell their products, since the Supreme Court had already decided he was allowed to do this. Funny that how 25 years later when the shoe is on the other foot, we are suddenly not allowed to list many items for any given reason. I digress, but the point to be made is, the problems sellers face are unprecedented. And the lack of leadership and true help for third party sellers over the years has only exacerbated the problem.

Just to put into perspective, Amazon is telling me that 25 cents to have their automated robot go through my inventory and pluck out a non-selling book to dispose of it is losing them money, and in order to break even, they need to charge 35 cents (once again, to have an automated robot handle my disposal). Are you programming a terminator unit to eliminate the target? Then I understand. But I don’t think Amazon is quite there yet.

TLDR Stop piling on third party sellers with outrageous fee increases and passing it off like your $1.56 trillion dollar company just can’t do it without the fee increases.

Soooooo… Amazon spent all of last year trying to funnel 3p sellers into FBA by offering intensives to add new ASINs to FBA and making it harder for 3p sellers to do SFP. Now that they’ve lured more sellers into FBA, they increase the fees. LOL, suckers.

Most referral fees will not change, and we are making only modest increases (about 2-3% on average) to fulfillment fees, in line with or below industry averages.

Amazon - PLEASE DO NOT BLOW US SMOKE.

We get it - You are our munificent Master.

Now the FACTS - the Small products get Hammered … 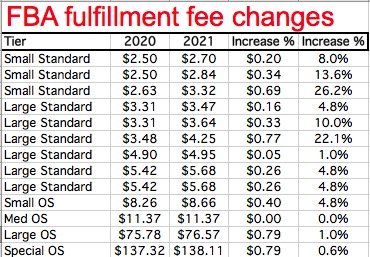 They have already done this in the past in 2016-2017 with significant fee changes for FBA.

I protest the fee changes because they are imbalanced to the system.

FBA has given me and my family legs that I would never have had with FBM going back 10 years.

People who have figured out how to make FBA profitable year after year are legit smart.

Well said, only those that lived through it and broke it down realize what a scam it really is.

So, let’s charge our sellers even more because they “made” more money, we made more money and just because we want, they can afford to pay more fees now, even though there is no legitimate reason to do so.

One day KARMA will go down hard with Amazon greed.

“We made record profits, now how can we make more? Yes…raise referral fees”

We help you We help you. You are our partner We are great. WE built new warehouses. WE gave you a break on shipping when it was late because the post office cant pay more employees to move the items because we are trying to put the post office out of business. We changed our shipping to one day so all third party’s could leave prime. Its like the cancel culture in slow motion. Just like the mods right here on the form. We don’t like what you say so we will silence you. We have been planning for the day they tell us to take a hike as third party.

Amazon needs to either sell directly or be a marketplace. It has proven it can not be trusted to do both fairly.

I believe 3rd party sellers should be “tested” but once those tests have passed, say a year of steady sales with very good performance, then FBM and FBA sellers should be weighted EXACTLY the same for the buy box along with Amazon’s own inventory.

It is legally not fair for Amazon to prefer its own services (FBA) over someone who has an established history of providing as good or better service. FBM sellers SAVED Amazon last year when they completely failed to ship even normal volume out of their warehouses for months but we were not thanked nor given permanent buy box fairness. Nope, the second they could ship FBA out, they took the buy box away from us again.

Sellers that disappoint should be put on probation with 1-on-1 coaching. Repeat offenders should be removed.

Amazon needs to start listening to its sellers that generate more than half of all profits and revenue (for the main site).

Takes real brain power to send all your stuff to FBA and allow them to do everything. That is your definition of legit smart?

I truly see no issue with them raising fees. My issue is those who think they have to use FBA to make a living. It doesn’t matter how many more sales you make if they are offset by the cost of shipping them the merchandise, paying for storage paying them to pick pack and then paying the the regular commission. Then having to add in the much larger return percentage and then the outright scams that make you lose your merchandise to a buyer scam. Then all it takes is one customer to complain about authenticity whether true or false…they cut you off and keep your money and destroy your merchandise(sell it for profit).

SO we’re announcing our plan to make sure 2021 is one of the least successful. Enjoy!

So, the FBA fulfillment fees are increasing by as much as 26.24%. Pretty amazing how they can justify that to anyone. They added a 12-16oz category to both small standard and large standard, which I’d bet is the most widely used two size tiers for 3rd party sellers.

We all knew that fees were going to go up! I sell a lot of small and large in the 12-16 oz range. Amazon’s costs to fulfill are less than my costs to fulfill and they’re able to get the goods to customers quicker. Even Deliverr cannot match Amazon’s low fulfillment cost. IMHO, it’s still an acceptable cost.

We go through this every year. When the cost moves from $3.48 to $4.25, what happens is prices move up 77+ cents. Typically, all of the sellers move in unison. At the end of the day the customer bears the cost increase. Sellers who cannot pass the cost to the customer perish.

There’s always customer confusion:
Q. Why did the price go up.
A. Shipping costs went up.
Q. But, shipping is free.
A. No, Amazon charges merchants for shipping, fulfillment, and customer service costs.
Q. I don’t understand - I pay Amazon for prime so that shipping is free?
…
LOL. PRIME is the big consumer con.

Cost increases have been moving up well above the average cost of inflation. I suspect that Amazon is driving an outsized portion of the uptick in the Consumer Price Index (CPI). Is any outfit computing a CPI on Amazon’s market basket?

we just need to make adjustment to the changing condition. i mean price readjustment will strongly reflect the price into consumer anyway. we have no winners here!

Whose sales increased last year but not mine, and get less and less traffic,it’s a shame.
I can feel too many sellers flood in in the past year.More and more difficult for small sellers here,seems the capital has manipulate the market. Thinking about to invest more to get little land to stand or find other plateform to go on…