Threatening message from a Chinese competitor

Please do not give in to that sort of scare tactic. You are not even bound to do business with them. Cancel the sale, keep documentation, report, and carry your case forward if need be.

I’ve received long messages in Chinese. I don’t even bother trying to translate them. They’re all spam and full of hot air. I report them, delete them and ignore them. Nobody’s going to blackmail me into doing something. They may as well never send a message and just go ahead with their scheme because I ignore and delete all of that nonsense. I’ve had several emails over the years threatening to “compete” against my domain name (for our company website) if I don’t buy “so and so” domain similar to mine. It’s all ignored and they all go straight to the spam folder.

I am so sorry this happened to you. How awful. I hope you report them to Amazon. Can you imagine sending this kind of threat to a seller without fully expecting your account to be suspended?

I’ve found Seller Support to be really helpful and competent - much more so than buyer support. With a couple of exceptions… but when I resubmitted those cases they were resolved. I can’t believe Amazon would suspend your account because of this kind of premeditated fraud, jeez… but definitely get in front of it and tell them what’s going on!

That threatening letter from them alone came make those “negative reviews” invalid.

I usually go on a report abuse spree when a seller sends me a letter like that, and look for items they sell that I can do test buys on and report that they do not match web page description. A few chinese sellers played that game with me…
They are gone, I am here.
Hit them hard and word gets around China not to mess with you. No chinese seller has threatened me in over a year.

Thank you for your post to the forums. I am going to review your case. Give me a chance to do that and I will get back to you either through a case or by private message here in the forums.

Thank you very much

Because you hijacked their listing,that’s why you are threatened.The wise decision would be leave this asin.Sure you can report to Amazon,but Amazon can do nothing.Because there is no direct proof is your competitor doing all of this.How can you confirm its your competitor hired this third party service? Guess is not enough!

Because you hijacked their listing,that’s why you are threatened.The wise decision would be leave this asin.Sure you can report to Amazon,but Amazon can do nothing.Because there is no direct proof is your competitor doing all of this.How can you confirm its your competitor hired this third party service? Guess is not enough!

What are you new here? Hijack implies that the chinese companies owes the ASIN - they do not. That is like Amazon 101 - the Product Detail Pages belongs to Amazon.

Show some patriotism, when a fellow american is attack by foreign bad actors - we should be supportive - not be tell him to cave to our enemies.

Try to hijiack other brands’ listing and come to tell us product detail pages belongs to Amazon thing,LOL

I’ve done it THOUSANDS of time.

I have gone toe to toe with big china players like Uxcell and won.

Even when Uxcell actually hired a US lawyer to after me. (He gave up after one email).

I’ve battled Sodial, Toogoo, Neweer, Gikfun, Omall, and dozens more. BISS is littled with the remains of chinese sellers who threatened me and who are now banned.

I have even contested TM with the USPTO and gotten at least 4 TM denied status by filing letters of protests (LOPs).
Just in July, think I wiped out over 400 “branded” ASINs by proving to Amazon they where

I have gotten AT LEAST 50 notices of infringement of IP (IPV) and I appealed and WON every single one of them.

So go peddle your papers elsewhere…

So why not show us how you are able to do this?

So why not show us how you are able to do this?

To be fair, Jeff, you don’t have enough time in grade to know that Schady isn’t merely boasting with the post you’ve responded to. If you’d read the posting history since Amazon so-unwisely unleashed the Red Tide that’s come close on more than one occasion to inundating The River, I suspect you’d have fewer doubts - and indeed, might well agree with many of your other fellow sellers that when Schady casts shade, scammers fade.

You can see a small example of why so many of us consider Schady among the cream of the crop in that regard in this thread (which is the culmination of many previous posts about the shady Red Chinese seller in question) from the spring before last:

Only took me 2.5 years, 6 appeals, and 4 four test-buy to get IPV reversed General Selling Questions

Success against the Trademark Troll Toogoo/Sodial. After writing, faxing, email, contacting exec support, doing test buys Amazon finally agreed that IP claim sent from a gmail account was bogus. Given the the appeal was granted at 12:24 am after sending it at 11 pm, it clear that Amazon US is no longer in the loop about IPV claims. This was not a high priority for me after the 1st month, so I just appealed it when the mood struck me. Amazon is still ignoring that Toogoo/Sodial is operating at …

There are many more examples, which is why Schady was so-roundly congratulated by so many of the forum vets in that thread - they knew by then how long and difficult the slog had been in that particular case - and that’s just one of the bad actors he’s slapped silly since they first started spreading pollution across the waters.

I am far from the only 3P Seller or Vendor who’s used Schady’s advice on IPV, DMCA Counter-claims, and legal-avenue maneuverings to protect our Intellectual Property from those who so eagerly hold it in disdain. I submit that you’d do much worse in that regard should you choose to ignore that demonstrable fact.

Thank you very much for your response.

I haven’t heard back from you and today I received a similar message again, could you please let me know how can I get in touch with you? Thank you so much 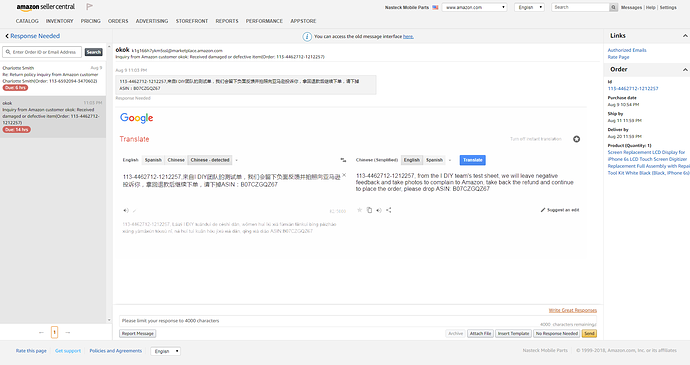 Susan you are the last resort for a lot of desperate sellers on these forums and on behalf of the Amazon seller community I would like to thank you for your good works!

And by “Amazon seller community” I mean those honest hard working sellers that are trying to make an honest buck on amazon while providing their customers with quality products and great customer service!

I have to agree. This is one instance where segregation works. Amazon should have NEVER let Chinese sellers onto the US amazon to sell to US customers competing with US based sellers. If anything they should have allowed US buyers easier access to Chinese sellers on their own segregated platform. This way the Chinese sellers could Counterfeit, hack, low-ball, hijack each others ASINs and threaten each other to their hearts content and it wouldn’t affect us so much. Sorry if I sound like a cynical isolationist here but I’ve seen one to many of these posts for my liking.

Well, every time they send you a message you can easily document it and it’ll ban the buyer. (Then they’ll create a bunch more new ones, and add $ to each one etc.)

Once you get a good case resolution, just create a template that you can fire off to CSR weekly or what not and paste all the negative review purchases there.

It’ll be an annoying chore on your end but you’re fighting the good fight! (Plus you’ll get all those extra sales from their fake test buys

since Amazon will make sure you’re credited).

If you hijacker remove your self from these listing.
and apologize.
Create your own listings and sell peacefully.
To have piggy back seller is not a blessing but opposite.
They are stealing money from original sellers.
You are in terrible situation, take a lawyer for help.