Well if you were curious of what it looks like when creating a plan. 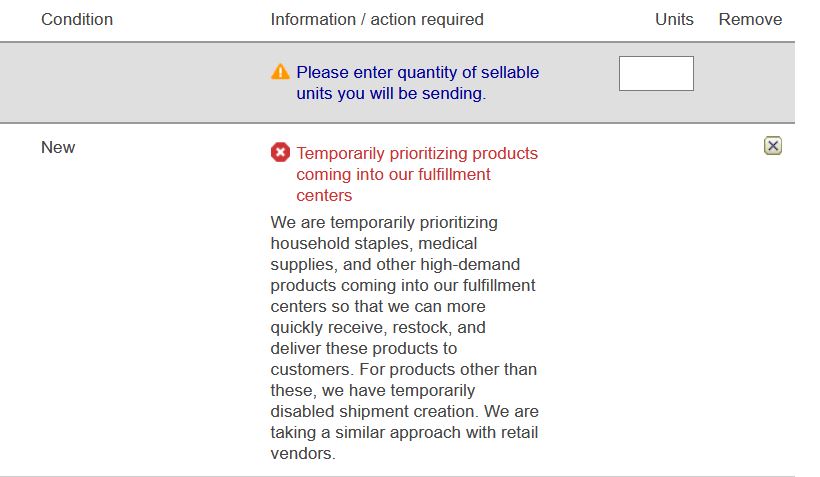 For those that are impacted you need to consider SELLER FULFILLED PRIME!!

So us sellers (FBM) who have stock cannot sell Medical supplies and you can if you are FBA? If that is the case, I think there should be a kind opening of the gate for sellers ability to sell and just cap the price with a block to a seller who tries to beat the over price limit if that was a concern to Amazon.

Top of the “boy, we sure could not have possibly predicted that one” list: March—even with the rise of COVID19—has been our best March in years. This followed our best January and February in years. Profit up at least 50%. But then Amazon went and made a big public announcement that got picked up by every major newsfeed. “No more non-emergency stuff” they said. Yes, technically, it was “No more non-emergency stuff sent in new shipments TO our warehouses, but everything already in stock will still ship as normal”.

What does the average consumer hear in that? “Amazon isn’t shipping non-emergency stuff”. Comments on the various news sites comfirm this.

Since the announcement reached a broad audience (around mid-day): Zero sales. We never go more than an hour without sales, especially when we’re as full stocked as we are now, with a lot of high-volume products and near- 100% Buy Box. Yes, you could say that a crashing stock market and uncertainty about the next 6 months have people hesitant to buy stuff. But all those things have been true for weeks, with no negative impact on our sales (again, we were UP 50% over last year). Plus, our other platforms have seen essentially zero change in the last week. Only Amazon has come to a screeching halt. I suspect it’s this ill-phrased and ill-timed announcement.

If this is true, then even switching to Seller Fulfilled will do no good.

And I enjoy people like you in life. First to complain, last to act.

Sales are up massively ? From sales number from China which are publicly known , you should be aware that even electronics are doomed to be at x2 , if you account for competitors being out of stock, you might even look at x4.

At the end of the day, you might think twice before saying you know what you’re doing, as you obviously don’t.

ps: when i refer to 2 months inventory , it’s taken in account the current state of things.

If I send the shipment would it be fine, considering the date of creation is 17th?

I also want to know this

Thank you left_coast I appreciate your question. I am a fulltime FBA seller and depend entirely on weekly shipments into Amazon fulfillment centers to sustain my business. Yes, this will be a major blow to my livelihood as I’m sure will be for most on this forum. Especially those unprepared and limited with funds. So, I sympathize with everyone here impacted. However, now is not the time to cast blame on Amazon and wallow about the hand we were dealt. It’s time to step up. All hands on deck friend. If we have to take a back seat for awhile so more important necessities can be made available to the public then so be it. We’re Americans. We’re a tough bunch. We’ll figure out how to get through this. I say we kick corona’s ass one handy wipe at a time, which is exactly why hand wipes, hand sanitizer, soap, disinfectants, food, batteries, etc., need to be made top priority right now.

If your business will be severely impacted in the short term, I recommend you visit sba.gov to learn more about the sba disaster relief loans that will soon be made available to small businesses at very low interest rates.

I wonder if Amazon can still receive the delivered products created on the 17th?

I think you are confused, who said you can’t sell those things FBM ?

The discussion here is that FBA sellers cannot send it ANYTHING now that isn’t a pre-approved item and nobody knows what that list actually is.

Amazon must discount the fee for sellers who have restricted shipping. Amazon and commodity sellers are still making sales and profits, but the rest of the sellers are losing money. Pls consider

In fact, the sales of our ordinary products have been miserable. This decision of Amazon further worsens us.

In fact, due to this panic, the sales of our ordinary products have been miserable. This decision of Amazon further worsens us.

Go back to sleep. You are not in the topic of conversation here.

At what point of the shipping plan is considered “shipment created”?

I make cake toppers. They are flat packed and some of them measure just 6x8x0.5". My user name is my shop name. You can take a look and see it.

I looked at them. Beautiful! Best wishes ahead!

It makes a lot of sense:

Your profile says you are in Maryland.

Has anyone received word from Amazon Lending on how they will be handling this situation? I have a payment due in 11 days and I cannot re-stock my inventory for electronics items. Pretty worried about how I’m supposed to give the gizinta when I have no gizouta…