funny how all the constitution thumpers who happen to lean right wing can’t distinguish between private and public entities and their own rights.

a click away from strainded inventory back to regular inventory but all my descriptions and images gone, any way to retrieve them. BTW, yesterday I lost a lot of money too cuz I liquidated many products even below my purchasing cost, good job Amazon! I indeed think this was attended to only “new condition products” on the items still under nintendo production, no 20years old discontinuated items in used condition sold as retro shit… sad but happy, do u share my feelings?

Just like the dvd category, in order to sell used, you must get ungated to sell new.

Firing an employee (assuming a private employer) based on race is not a government action either, and is certainly illegal. So your GOVERNMENT ACTION statement holds no water.

I did forget that the baker won in the US Supreme Court (at a cost of hundreds of thousands of dollars, and horrible losses due to bad PR as you pointed out) but that case only involved the message on the cake, not refusing to serve a gay couple. So as far as that goes, it was an inaccurate analogy on my part. If he had refused to serve them at all, it’s a slam dunk loser for the baker.

This seems to be a US only thing. I sell used video games from time to time as well. I’m still able to sell them and didn’t have to apply for approval.

Yes you can relist. Refurbished is a completely different animal.

This will lead to more counterfeits trust me. The only people that this is going to get rid of are sellers who have been selling on Amazon for years and have good track records. The counterfeiters will bribe their way in and now get higher prices because the honest competition will be gone. This is something that should have been done with notice and should have been done in months before and not in the holiday season as many sellers have been stocking all year for this time.

I can only imagine the sellers who do FBA and what they are going through right now.

Go to the Inactive inventory (New) page that shows the reason for inactivity of each listing.

First click on Inventory. When you get to the Inventory page, you’ll see a link to Inactive Inventory at the upper right of the page. Says “new” in red next to it.

Not buying that for one second. It was more than just an email. All permissions were reset and even ungated sellers were required to resubmit applications for approval. It wasn’t a mistake. A decision was made, and then reversed for some reason. I’d love to be a fly on the wall and hear what really went down.

This is a complete joke. They’re literally screwed over hundreds of legitimate sellers. Unreal.

I’m wondering if they were trying to gate Nintendo Switch products. Just a hunch.

Or there were so many angry sellers contacting Amazon they reversed course.

Whatever the reason they’ve spooked a lot of people.

Hi Susan, I started this thread and also emailed Jeff & his team about this. I am so glad you all heard the sellers’ concerns and took action. Any idea what caused this error?

Hi Pantingfish08 – have you tried re-listing your offers?

Thanks for the reply, this afternoon relisting stranded inventory wasn’t working, but now it seems that it is available in my inventory. Thanks. On another note, I assume this is a warning for the future for us who sell Nintendo products. How does an email like that get sent as a mistake, how is an email like that already typed up and ready to go?

Actually take that back, it says in one place that they are available, but when I go to my FBA inventory they do now show up

Apparently Amazon states they make a mistake on the Nintendo listings 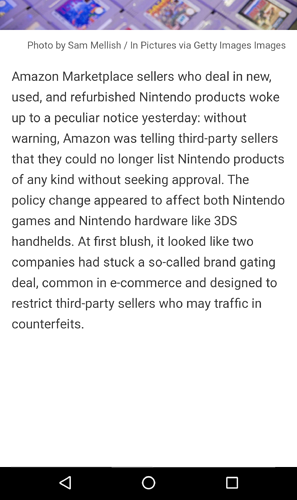 Best if everyone read this article, there is more to come with the Feds vs Amazon and anti trust in US, as in EU

We had hundreds of Nintendo product listings that were affected/deleted by this “error”. Is there any way to “bulk fix” this without spending hours relisting everything one by one?

I am going through each system one at a time, I had some that looks like Amazon relisted and others that were gone and needed to be checked individually, this will probably take weeks to get sorted out for us