here he is again, back with another 5000 reviews from another product: 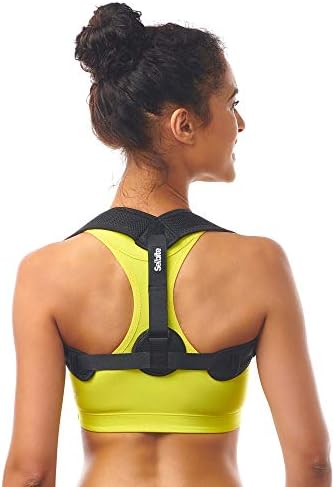 …internal employee messages viewed by Recode show that pressure from the Federal Trade Commission (FTC) led to at least one of the notable bans. Communications between Amazon employees viewed by Recode also appear to expose an inconsistent punishment system in which employees need special approval for suspending certain sellers because of their sales numbers, while some merchants are able to keep selling products to Amazon customers despite multiple policy violations and warnings.

Read that article, it has some amazing revelations on how perhaps these sellers we are seeing here come back to life in spite such gross infractions against Amazon TOS.

The other side of the story, FTC - Federal Trade Comission does take actions against Fake review schemes and will pressure Amazon to clean up the marketplace. So while this Agency works slowly, it appears that reporting these scam sellers to FTC works.

And they did it again. 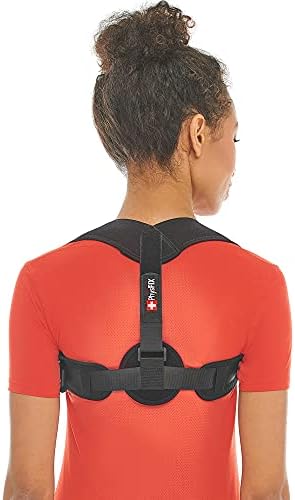 Check this feedback: “what is going on with these reviews? why is there a YETI cup reviewed? this is 100% bait and switch, fake reviews for a product that I was mislead into buying”

Message from Amazon: This item was fulfilled by Amazon, and we take responsibility for this fulfillment experience.

Thank you for posting this. I just went to Google News and searched for “Amazon fake reviews” and was appalled at what I saw. This type of PR is damaging to all of us.

Another interesting observation. Apparently, the hackers have the ability to attach the same hijacked reviews to multiple hacker’s listings. 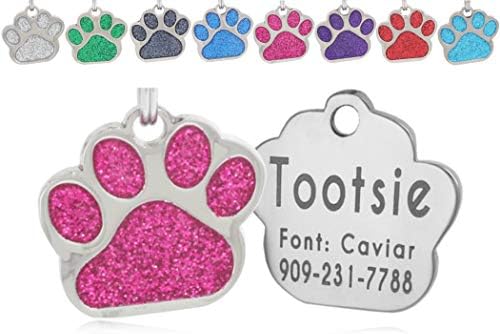 Quick look lets you see that all these products show the same number and identical 28,366 reviews as the pet tags 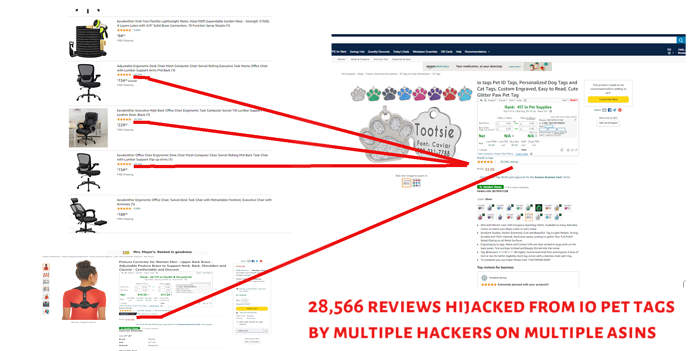 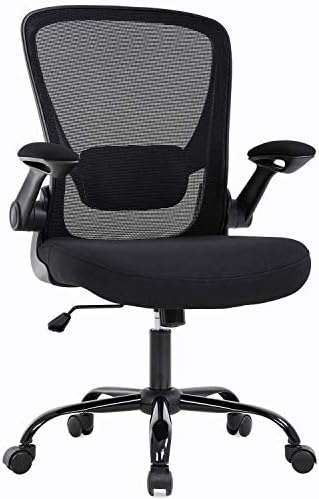 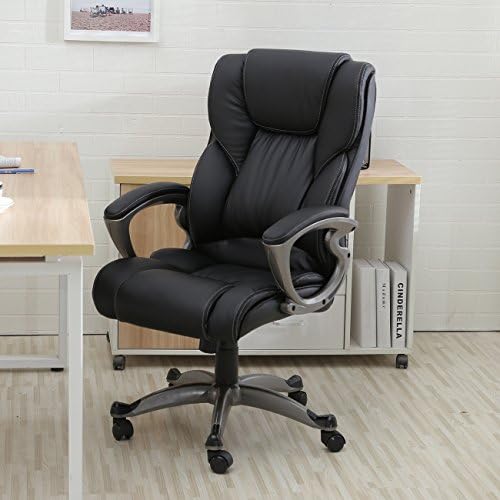 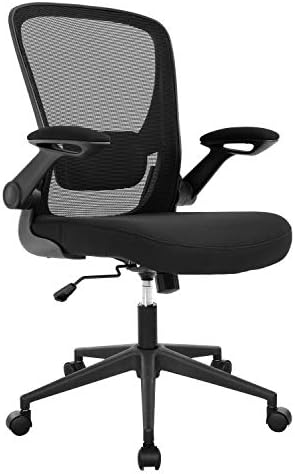 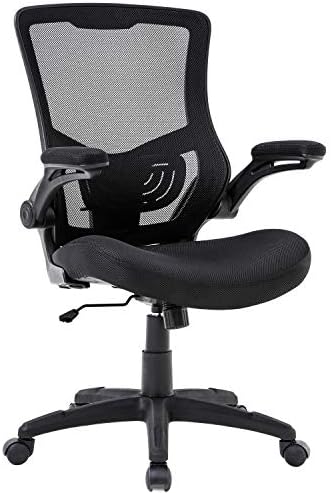 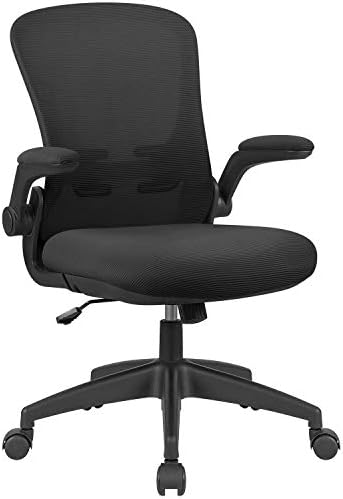 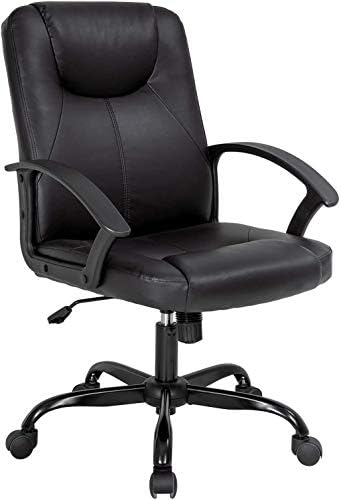 Some of these are also sold by another Ukranian seller
who sells these Brands
https://www.amazon.com/sp?seller=A1T6SWHV0LNXOD

Thanks for bringing this to our attention. We were advised that the issue had been identified and corrected. I have resurfaced to the team to investigate with high severity.
-Claire 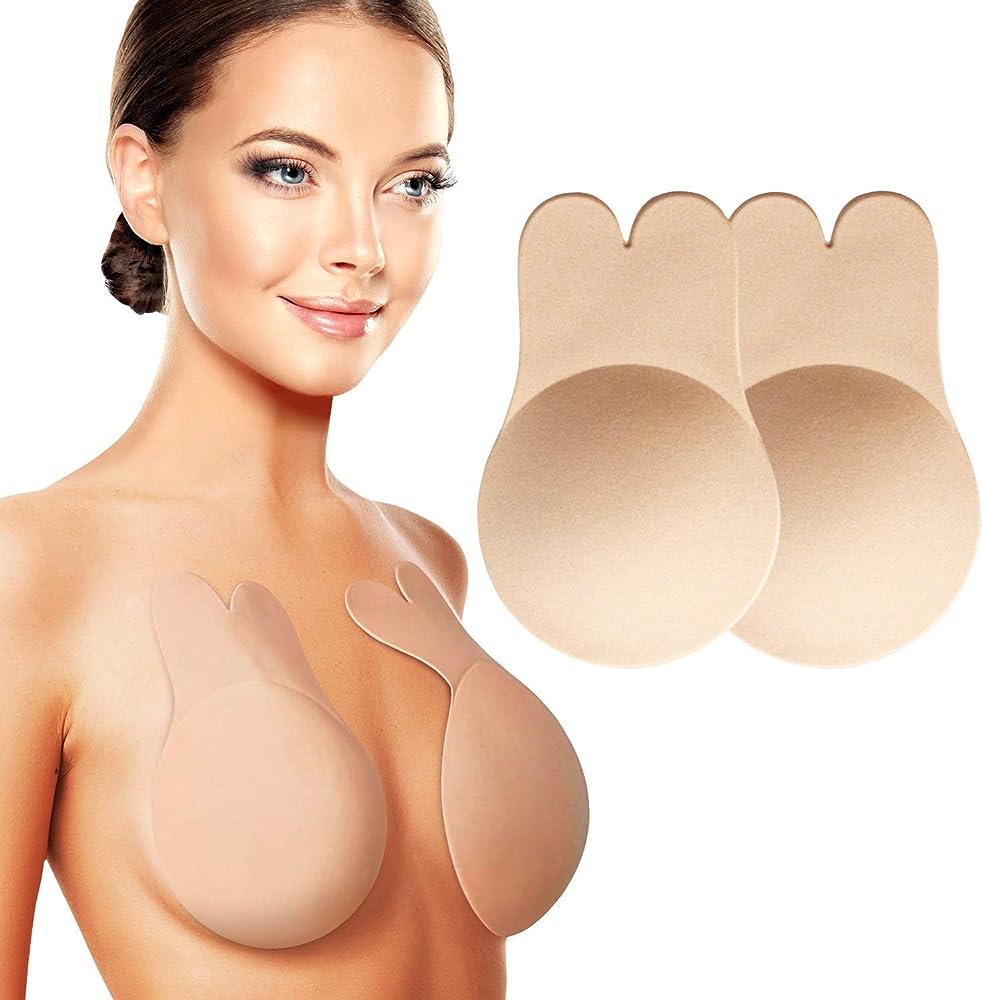 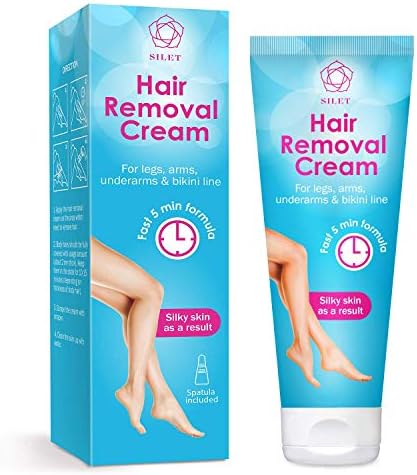 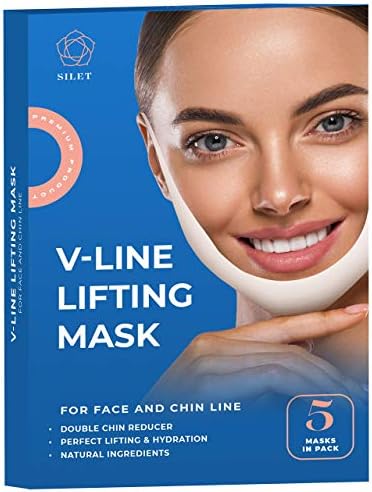 I had to chuckle over the juxtaposition of your comment and the ad directly below.

Didn’t catch that at first .

We were advised that the issue had been identified and corrected.

Simple solution it appears to me, @keyslife should be on the payroll to help solve this problem.

There is a very enlightening article on recode

That was a “good” read.
Thanks for sharing that.

For those who don’t take the time to search out articles that are referred to,
here are some other tidbits we enjoyed.

Why the reluctance to respond?

“The FTC inquiry appears to have led to a ban of at least six Chinese sellers, according to internal messages viewed by Recode. But the internal communications between Amazon employees show that a high-ranking Amazon executive had to sign off on the bans due to the amount of business the sellers do on the company’s marketplace.”

“in an email to Amazon lawyers later that day, another Amazon attorney noted that the FTC inquiry asked for specifics on what actions Amazon would take against the brands and sellers in question. The Amazon attorney also asked colleagues if the goods were stored in an Amazon warehouse or whether the seller handled storage and shipment of the products, because “we may frame the response differently” depending on the answer.”

Whether or not inventory is FBA is a factor in determining enforcement of policy.

As many here have mentioned…

“what appears to be happening is they commit abuse on one account, get suspended and reinstated, and then shift abuse to another account.”

While hopeful concerning positive outcomes concerning the FTC inquiries, every time we read
an article like this we realize the corruption is so deep and so widespread that we wonder if it
can ever be stopped.

Nice to finally get an answer (albeit not from amazon) that the big boys do get special treatment. So disappointing though that the sacrificial ban of the manipulative brands was only because of FTC intervention. That does however explain why amazon doesn’t crack down on fake reviews. Then again they all started off small and got big because of the fake reviews, so it becomes a bit of a loop. Perhaps amazon let them go because they had the potential to be big because they were cheap imports.

I can’t believe with amazon’s “buyer above all else” policy that they don’t see the harm it causes. All they do is put up more bots and stupid rules that hurt the honest sellers in an effort to protect buyers. Yet more damage is done by fake reviews, dangerous products, and junk products. Several years ago a friend told me they were tired of getting things that weren’t as advertised and were about done shopping on amazon. They didn’t know how to file a-z and didn’t know how protected they were when the seller wanted them to be out money on a return and I ended up helping. Even so it’s a hassle each time.
Personally when shopping for an electronic item recently I started the search on amazon (as normal) and was so doubtful of the quality and reviews that I ended up shopping at a different site. I wasn’t familiar with the brand for this item but going to a “vetted” site let me know it was at least a legit brand, not a fly by the night one. So perhaps amazon is still growing, but so is the buyer base that doesn’t trust them. In short, if the brand isn’t on legit websites (amazon doesn’t count) I’m not buying it.

I can’t believe with amazon’s “buyer above all else” policy that they don’t see the harm it causes.

This is also from the article:

“Ultimately, it isn’t Amazon taking the biggest risk; it’s the hundreds of millions of people who shop on Amazon each month and trust they are buying quality merchandise.”

Oh and I’ll add that years ago I taught my mom how to use fakespot (have since learned it’s useless). Anyway she used it to buy an item that was rated well and turned out to be junk. I helped her return it and then looked at the listing. It was the same scam as this thread. Stolen reviews.

We would be remiss if we did not also mention the ugly counterpart of stolen reviews…
Fake negative reviews that many of these same sellers use against their competitors
that Amazon does not vet or remove.

We think we have heard that Amazon does not remove these reviews because they
want the customer to have an authentic experience.

Amazon, all of these except the adhesive bra are still live for Prime Day!

This is seriously appalling, the seller just launched another store, probably using a stolen identity, 9 pages of hi-jacked combined listings, with 28,000+ reviews per item, how 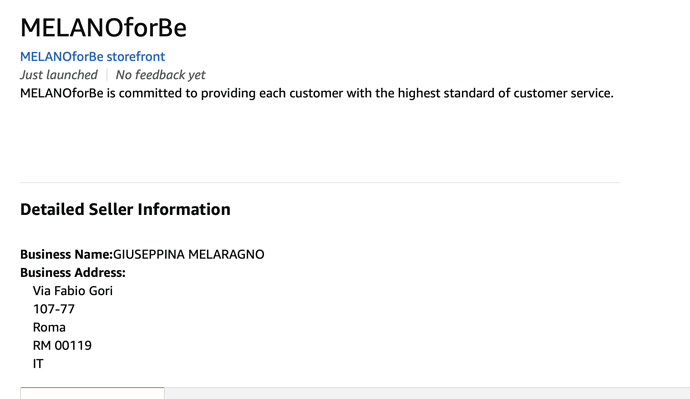 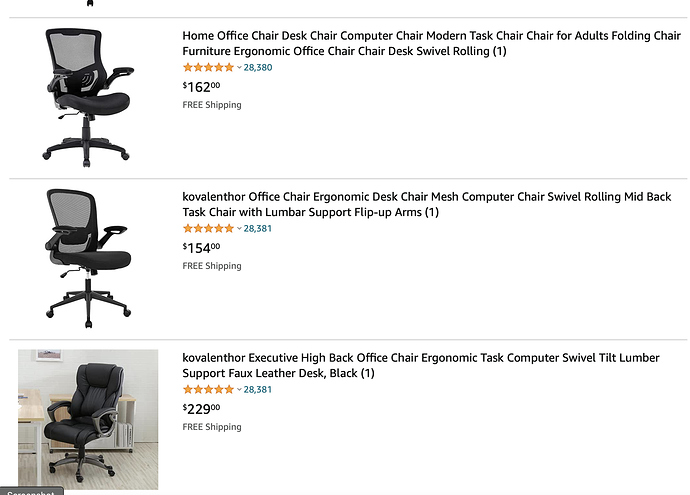 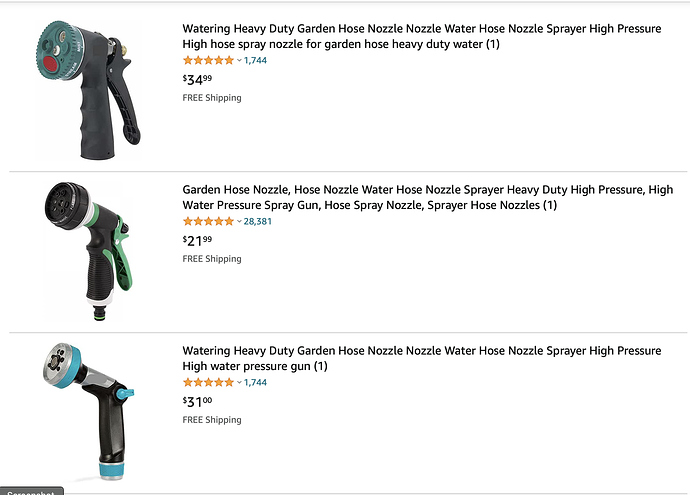 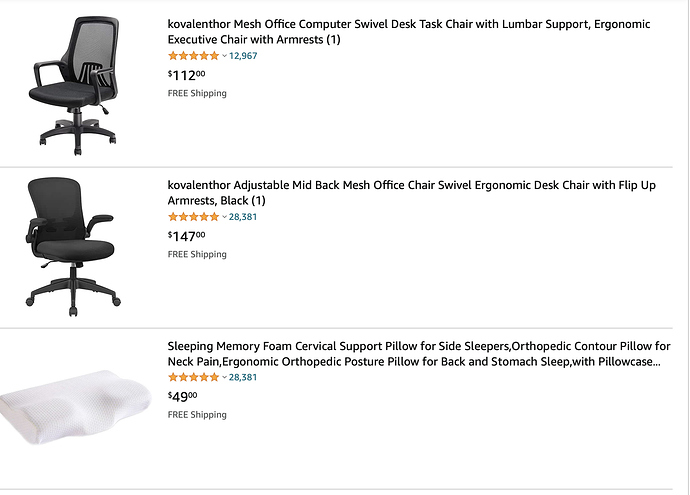 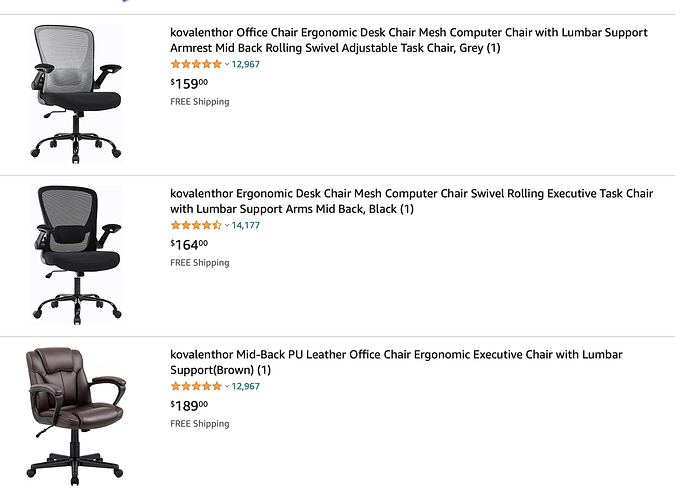 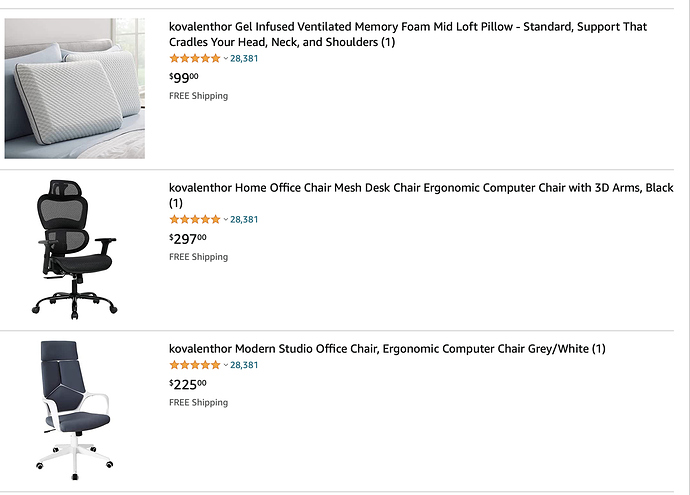 so is the system still rigged??