As further proof that the above announcement is mostly just fabrication, I communicated with a customer today that told me, when checking her delivery of an item which had some faulty tracking so was showing up incorrectly in Amazon’s “tracking” (computer to computer talking problem).

She stated that the Amazon tracking in the app gave her a message that the package appeared to be lost and an option to click here for refund, which she did and that filed an A to z, which was then immediately granted.

So, I’m not sure where this “If the item was not received, the customer is directed to contact the seller through Buyer-Seller Messaging” is happening, but, in the real world, Amazon is telling customers with a package problem to file an A to z and get free item instead of trying to find out if there is an issue.

We want to remind you about the most effective strategy to prevent unnecessary A-to-z claims and expedite their resolution.

For FBA products, this policy does not make sense.

A-to-z Guarantee claims are only for FBM orders. 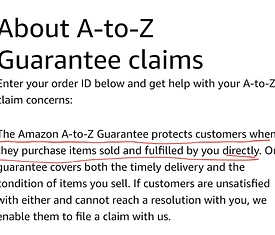 Make no mistake what these reps do is what they are “told to do” by their managers.

Closing cases fast, keeping case numbers and AZ financial burden down is what earns the managers
bonuses. Upper management doesn’t care how it’s done because the open case numbers
are low and they pat the managers on the back for doing a good job.

Even a monkey could follow a flow chart that only goes in a couple of directions unless
they’re under pressure to just close the case, period.

Even a monkey could follow a flow chart that only goes in a couple of directions unless
they’re under pressure to just close the case, period.

That’s the thing - the “flow chart” is always going to flow in opposite direction of fact, and the seller.

That happened to us, they refunded a buyer that claimed had not received the merchandise $300.00 plus, and got a refund. Amazon said that me providing a UPS label tracked as delivered was not proof that the merchandise was there.

Well, there were prior messages from the buyer stating he had received the order and wanted to return it. I told him to open a return request to start the process, which he never did.

So, when he was refunded and I appealed basically they told me that I had not provided enough info for them to clear it out.

Now our performance is affected and we lost 300 plus dollars.

Needless to say, I sent a UPS label to the buyer (benefit of the doubt) thinking that maybe he realized he had made a mistake, but he never responded to my messages nor did he send the cylinders back.

Amazon, did read the messages later and accepted that the buyer had received the cylinders, but told me that he was no longer required to send them back since the claim was closed.

Thanks a bunch for that

A-to-z Guarantee claims: If you purchase Amazon’s Buy Shipping and ship on time, you are protected against claims where a customer reports problems with delivery. Amazon will cover the cost of these claims and they will not affect your Order Defect Rate

Lost packages have skyrocketed in the last week (e.g., theft, buyers just wanting a refund or an extra item for free, etc). I expect this to continue further with the current Corona Virus CRISIS and hope Amazon does something to support Sellers (same way the panic is happening at Stores, same thing seems to happen online) … not just the “use Amazon Shipping Labels” which is not an option for all Sellers.

Also I found there’s buyers negligence … many times the customer has the package but did not know it until later (e.g., Customers Son or Daughter takes in the package - happened with 2 buyers, a mixed up order, customer clicked on my order # and meant to click another sellers order # … Luckily since Buyer Support had no idea how to handle this lost package to ask the right questions, she called me with customer on the phone and by me playing detecting asking the APPROPRIATE questions, I discovered the buyer looked at the incorrect Order ID… that mistake by Buyer Support would have been costly.

Here’s some advice for Amazon … Give the BUYER SUPPORT a list of REAL Questions to ask the customer to find the package (not just useless questions … do you have the package? And something with a Buyer Online Signature saying for the BUYER to ATTEST Under Perjury or Fraud that their above statement is true and accurate at risk of removing BUYER Privileges, penalties, etc. if determined fraudulent … guarantee if the buyer has to sign something like that it will reduce false and negligent claims and finally help solve this problem that many sellers dread when they receive the email “Where’s my Stuff; Customer asking for refund” … (It is about time Amazon start pushing Buyers to have better Buying Habits like they do with Sellers)

A-to-Z process is broken. Amazon does not comply with its own policy when it comes to international shipping purchased through Amazon. We had two international packages that showed arrival at the destination’s customs but no confirmed delivery after that. When customers filed A-to-Z for non-receipt, Amazon just deducted full payments from our accounts. Should they be covered by Amazon’s own policy?

This policy is totally pro-buyer.
Amazon do not cares about the messages, even when costumer admits that receive the products or made a mistake ordering the wrong product. More if we solve an A_Z claim with costumer it still counting on metrics! Why if it’s solved?
One specific case of my store: Costumer made a mistake ordering a product, we sent the product she ordered. On messages Amazon can see all the conversation that proves what i say. Costumer leave a negative feedback saying that we sent the wrong product and open a A_Z claim.
Guess what? Until today costumer has the product and the money. I asked Amazon at least to remove the feedback because is false, and off course they did not remove it or did not count the A_Z claim on my Metrics.

I feel very frustrated with Amazon on this situations, because always care about costumer!

PRECISELY. This needs to be escalated to a responsible, higher team member. @James_Amazon @Chris_Amazon

I also never receive notice of amA to Z filed claim, I hand found that I just check everyday as part of my morning routine, it shouldn’t have to be this way but I’m doing what I can to avoid the Amazonrobot who automatically never read the communication history and just go ahead and accept the claim. I ALWAYS USE MY AMAZON SHIPPING LABLES TOO.!

This system is a joke

It’s because Amazon reps do not care about sellers, it’s a one-sided customer support, where sellers are simply non-customers. As soon as a INR is filed, the first (often 2nd and sometimes 3rd) line of reps usually do not look through communication, shipping logs and/or any other supporting documentation showing that item was delivered… using one’s brain is too much work and also takes too much time from them… much easier to just take the money away from sellers and then let someone else from seller support to deal with the issue! That is, if those sellers are aware and persistent enough to follow up to those claims. I’ve seen quite many posts here about how customers’ original messages acknowledge items received, but then they opened INR and got their money back and also kept the items
Amazon’s supposedly protected “buy shipping” don’t mean crap to them, you’d still need to battle your way through to get what SHOULD BE A GIVEN AS PER AMAZON’S OWN POLICY. One thing I like very much about eBay, is that you automatically win those cases if tracking shows item delivered

Wrong!
Had you refunded the customer, as you say, It WOULD have been a Grand-Slam HIT to your metrics.

Anytime you issue a refund after an A-Z is opened you are struck out.

Did you file an appeal to this A-Z ?
Spell out what you wrote hear in the appeal.

After reading all this, it is becoming apparent that Amazon appears to be making massive profits by throwing sellers under the bus to protect their reputation. It’s very underhanded and seems to be a deliberately designed system.