PRBA only recognizes 5 companies in the US that perform the testing, all of which speak, and write their findings in English. Meaning, that all imports will be required to have testing by these 5 companies or exempt from testing per UN 38.3 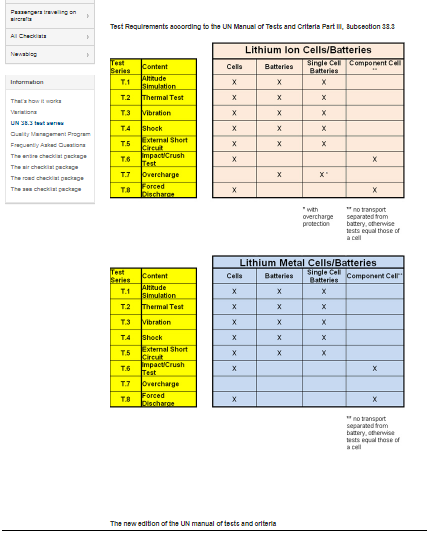 I don’t see anything new that hasn’t been forced or applied to the batteries listed at ecia.

I won’t be surprised if books about lions are also blocked.

That’s a good one! I’ll be surprised if they are NOT!

I’ll bite… It’s for the same reason that people of a certain political persuasion in THIS country want us to comply with international laws for firearms, regardless of the 2nd Amendment.

…and they want us to pay for carbon credits while China goes Scott free because they are a “Developing” nation.

So this is about Lithium batteries… Or is it LiON, or is it Lion…

That, and the One World Order thing of Amazon and the US following UN and international laws… From The Late Great Planet Earth by Hal Lindsey:
“It is said here that the beast (the Roman dictator, the Future Fuehrer, or the Antichrist) will be like a leopard, a bear, and lion. (p. 94)”

Regarding The Beast of Revelations:
“The leopard was the Greek Empire, a bear referred to Median-Persian Empire. The lion (Babylon) (p. 94).”

“And the beast which I saw like unto a leopard, and his feet were of a bear, and his mouth as the mouth of a lion: and the dragon gave him his power, and his seat, and great authority. (Revelation 13:2)”

I could go on, but I wonder if they’ll be blocking Bibles too… or any other book that contains LION?

OR… Maybe this is retaliation for Trump’s tariffs?

Judging by the pesticide debacle, almost a guarantee any item that has the word “battery” in the title or description is going to get the flag.

Over 20,000 results in book titles containing “Battery”. Here’s one certain to get blocked:
“DIY Lithium Batteries: How to Build Your Own Battery Packs”

i tried to sell toy coins and got flagged for not having a collectors coin license.

So, not only do I need to get this done, I have to have it done by select companies?

Yes unlike your concerns in your post, mine is different

I actually asked their rules/requirements…

As per your email, I understand that you would like to know that do you supposed to get batteries tested at specific labs for the Asin Id: B081QD15KT.

Please be informed that, there is no specific lab where they you need to test the battery. You just need to follow the Amazon guidelines to make sure that the battery fall under the specified criteria.

Moreover, If the product is a FBA listing you need to upload the SDS.

To learn more about the same please refer the below mentioned help page:

Better archive that page before they block it because it has a sentence with “watch” and “battery” together.

On a more serious note–some time after the turn of the year when the fallout begins settling, of course–if a product is extant on Amazon, then it follows that they have the documentation available somewhere. My question is, wouldn’t they be required to make that documentation available in some kind of a timely manner upon request? If so, couldn’t we just request that from them and then upload their own documentation back to them? Is there any way in which that does _not_fulfill my responsibility for obtaining and providing the test summary? And is seeking the most direct path to a solution something that they could possibly get upset about us doing? Or block us from by willful inattention to those requests for as long as possible or something?

it says “This requirement will be enforced via country-specific regulations”
If the US is not in the united nation, does that mean that ASIN in the US marketplace won’t be affected?

No. They are different reports.

I think the normal battery factory will do this test.

We are an authorized distributor for a large publicly traded multinational manufacturer. We sell a few of their widgets that contain LiOn batteries (permanently sealed inside the product).

I forwarded the request for the UN test summary report to my account manager and got a response with the test summary in under 24 hours. They were able to provide this as easily as any manufacturer could provide an MSDS.

I will cross my fingers and keep you posted on how the process shakes out for what ‘is supposed to be’ a process as easy as dotting the i’s and crossing the t’s.

For all of you spun out about this… The UN regs have been out for a long time… this is nothing new. Why is it being enforced in the US? Basically… UPS/Fedex/etc (and their insurance) are requiring this. This isn’t the UN imposing on US sovereignty… this is the free market (UPS, Fedex, their insurers, thus Amazon, etc) willingly adopting trade-developed standards and practices so that they know these products/batteries are safe to ship in airplanes at 10,000 feet in a non-pressurized non-climate controlled cargo hold… and safe to get crunched in a conveyor belt… and safe to transport in a salt-water-humid (ocean) environment.

The industry worked with the UN… because things ship internationally… and no one wanted US regs and different EU regs… causing unnecessary additional costs… like in the Auto industry where a BMW has to be designed to meet both EU and US crash tests.

I wonder what % of stuff at amazon warehouses has Lithium ion batteries. I have sold about 15,000 items this year. My guess, 12,000 of them had batteries. Of my major products I did some research to see if I could find this lithium battery test. I could not. This could kill my business as I can’t ship 15,000 items manually without quite a few employees. The employees would make my venture less lucrative. So, if these tests are difficult to find I am going to have to scale back my operation by 60-80%. Disappointing to say the least.

Too bad for apple products made in China as well…

The worst thing is Disposal. If you left inventories in FC before Jan 1,2020.

Anyone have Sony report already to share? Or, does each and every vendor need to request that from Sony individually?

If you are not authorized seller, no.

If we buy from a supplier and not direct like say I purchase Sony headphones but it’s not directly from Sony
Who am I supposed to request this battery test from?