ASINs violating Amazon title guidelines to be suppressed from search

Who knows??? the automotive parts and accessories style guide shows the title character limit as 50. Yet, two of the 4 example “good” titles are over 50 characters!!! what a joke.

The same for food
104 characters in the “good” example. 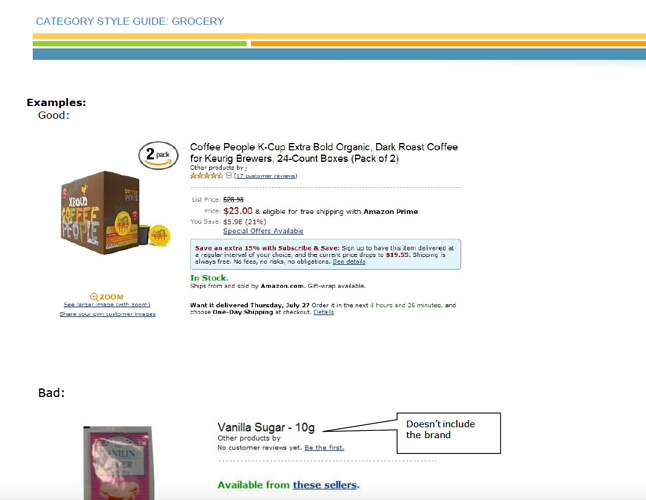 I think everybody should enter comments in the topic that will get read by Amazon the topic below. It seems to me that this is a duplicate topic (?)
Look for my comments asking the moderator is Amazon is now going to be using CONCATENATION to build a listing title.

As long as Amazon is doing work on listing titles I would like to suggest a change from current policy, We all know the trouble people have listing a product and then getting hit with a trademark or copyright or patent infringement. Why not change the code so that after our Brand Name we can add the Trademark Symbol? This would save other honest sellers from inadvertently listing a trademarked product without doing due diligence to verify the supply chain and make sure they have a legitimate p…

I have two questions I need help with: When you go to your product listing under vital info you can choose the txt under “product name”. Is there a difference between product name and product title? When you fill out product name it allows 250 characters. Is this going to be changed to 50?

After amazon.com identified me as a seller they stopped considering any Report Incorrect Product form I submit. It was either that or the number of forms I submitted.
The seller support fix a product form is incomplete, without a field for every attribute at the minimum, and is hard for both sellers and seller support to use.
But Amazon.com doesn’t admit mistakes, so correcting errors is that much difficult.

They’re ancient history and could not care less.

They’re ancient history and could not care less.

That is my take on it too, if the product was still viable and profitable they would maintain the page.

Your merchant name for Brand or Manufacturer information should not be included, unless your product is Private Label.

it used to be that the BRAND HAD TO BE INCLUDED and took up prime real estate, first position in the title.

not any more, unless you are a private label

Not any more, unless you are a private label.

Except they’re never going to come across another Gutenberg bible that they keyword stuffed. . And mine is now in big trouble. Just kidding - this entire widget-worry panic is ridiculous.

The guide says 50 character limit for title, which would be very hard to accomplish for most products in the Tools and Home improvement category, and would leave out important information that will create a bad buyer experience.

Ttake for example the “Ideal example” right from the styling guide as written by Amazon, The title contains 80 - 90 characters, but they say in the SAME document that the title should be 50 character Max, how does that make sense?

how does that make sense?

It appears that most if not all of the guides are totally contradictory like this.

If it’s a branded listing with several sellers, who is responsible for fixing the title so that it should comply?

Your merchant name for Brand or Manufacturer information should not be included,

I just re-read this

but the Brand is required

They want small sellers to FBM that way amazon still makes like 20% for having product sell through the website and does not require amazon to store or touch item = more profit for amazon. thats part of reason why they started sfp

I agree the Handmade guide has not been updated since 2016… So not sure what the exact new guidelines for everything is.

Is the Title length must not exceed 200 characters. across all categories ?

they still require the Brand

The new guidelines make no reference to requiring the brand in the title…some, but not all categories do require it.

Is the Title length must not exceed 200 characters. across all categories ?

One of our Seller Community’s favorite forum moderators, Super-Mod Susan H, posted what appears to be a fairly-definitive answer to this question (among others), in one of the multiple other fora threads on this topic, here:

Hello Sellers, Your business is important to us. We want to make sure that your business and the buying customer experience is not compromised by products whose titles do not meet Amazon’s product title requirements. In general, these are titles with one or more of the following characteristics: Title containing promotional keywords and phrases (for example, free shipping, 100% quality guaranteed, etc.) Title containing non-readable characters including emojis. Title exceeding more than 200 c…

With that said, there remains a great deal of conflicting information on this topic - certain Style Guides say one thing (and often enough, directly contradict that in the included examples of what’s “considered” to be acceptable); various Seller Help Content pages often enough offer conflicting guidelines (even when the Editorial Team has included pages demonstrating such disagreement under the same Help Browse Node), and thus say yet another thing; the empirically-demonstrable facts on the ground may well be found to offer but illy-comporting realities with supposedly-concrete policy and procedure.

Admittedly, such as the last has been the case in human society since we first came down from the trees - but there’s precious-little evidence to suggest that the Toffleresque is not presently tacking quite close to the Kafkaesque course - and soon enough may well prove to no longer be merely tangential…

The obstacles presented by The River - shoals, sandbanks, eddies, currents, bores, riptides, et al. - are decidedly-not a new thing under the sun; such challenges honed the navigation skills of the first of us who cast our fate to the tender mercies of a voyage undertaken upon this or that body of water; those who hath deftly employed resort to that most-admirable attribute - demonstrably possessed, alone in all-known Creation, by humankind - of adaptability to circumstance, have for aeons past long found such to be the readiest path to success, fortune, security, sustainability, and succor.

The human mind tends to prefer simplicity - child or adult, we yearn alike for solid ground upon which to cast our anchors, and to raise our own foundations, and a handy hook upon which to hang our hats - but broad experience in business will teach even the most-casual of observers that Amazon is hardly unique in making such a provision rather difficult to easily obtain.

There is, of course, no acceptable substitute for actual real-time/real-world experience (hence the fondness for “OJT” that military and other large establishments - like Amazon - expend so much time and treasure to underpin with prerequisite training, and subsequent evaluation of the results of the actual exposure to gaining such experience); it may certainly not be gainsaid that such complications that inevitably arise from the inherent unintended consequences of the silo-management model that organizations like Amazon embrace don’t muddy the water - a prime example of which circumstance may be seen in the discrepancies exemplified by the above-listed conflicts in Amazon’s policies & procedures.

Still, there is no evidence to suggest that Susan takes time to weigh in, on this or that topic, until circumstance(s) dictate such is not only advisable, but also warranted - there’s likely a very good reason why she felt constrained to do so when the Amazon News Team published the illogical 50-character PDP Title limit implied in the original June 2019 Headline that’s the subject of sell4more’s and so many other threads concerning this.