Actually, I think Walmart is the answer I was looking for. I suspect he was fulfilling orders from other venues via Amazon.

I’d like to see the timestamps on all of those tickets.

Whenever you reply to, or open a new support ticket - you get shuffled back to the end of the line. This is an easy way to push back their response for days or weeks.

Even if English is not one’s first language, this simple grammatical rule should be easy to learn no?

Even if English is not one’s first language, this simple grammatical rule should be easy to learn no?

My Grammarly program is always telling me that I use them when I’m not supposed to!

I just noticed Amazon does this themselves on this very forum!

It has a “Health,Safety,Sustainability,Security & Compliance” section lol.

WHAT THE HELL IS GOING ON?

SPACE GOES AFTER COMMA WE LEARN THIS IN KINDERGARTEN. 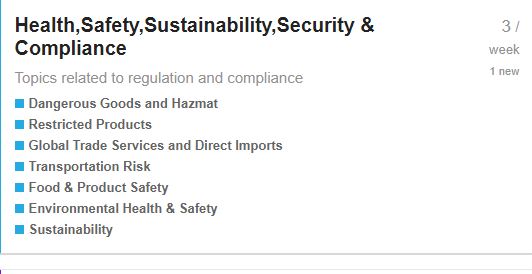 I glazed over after about 10 sentences.

Could you lower the anvil, please?

If I understand our friend @Philip_Household correctly (with me, that can admittedly be an iffy proposition), they have run afoul of the SIV (‘Amazonese’ for “Seller Identity Verification”) Amabot(s) that Amazon has deployed for new SoA (‘Amazonese’ for “Selling on Amazon” aka 3P Seller aka Seller Central) Accounts over the last few years (at least, for non-fast-tracked Unified North America.

Unless I miss my guess, some ‘t’ wasn’t crossed, or some ‘i’ wasn’t dotted in the initial application, and Amazon’s admittedly-terse-and-obscure templated response was not correctly interpreted (perhaps merely as a result of commanding Español, rather than English, as a First Language*).

Mayhaps in expectation that Amazon Seller Support Representatives would be able to offer the same type of personal involvement that:

all provided for OP’s initial applications to those sales engine marketplaces, s/he apparently opened multiple SeSu cases in an effort to correct the problem.

Experienced 3P Sellers such as yourself are well-aware of just how detrimental that type of insistence (based, near-assuredly in the prevailing zeitgeist, upon little more substantial a determinant than that the pursuit of instant gratification of desire is attainable in all things) can be to enjoying a successful sojourn On The River - but unless one is equipped with that knowledge aforehand, new sellers typically do not (how many new sellers have spent any time at all so much as even studying Seller University, much less the Seller Help Content & the various Amazon Seller Fora, before jumping feet-first into the turbulent, tempestuous tide? All-available evidence suggests that in those regards, unsuccessful applicants outweigh those proving successful by a large margin).

Professional Business folk are, generally speaking, rather accustomed to finding success in seeking solutions via pressing this or that provider for them - but Professional Business Owners accustomed to finding them when a Byzantinely-complex bureaucracy (like governmental agencies or multi-conglomerate corporations such as Amazon) are involved tend to quickly realize that such an insistence does not comport well with the processes & procedures said bureaucracy requires.

Gmail is unquestionably a popular e-mail client due to its features & functionality, but Amazon is well-aware that those attributes can easily and inexpensively be extended to one’s own Professional Business-owned Domain e-mail client(s) with only a modicum of effort, and there’s some evidence to suggest that it may currently be frowning upon new SoA Account applicants** who are unwilling (or incapable) of putting forth that modicum of effort to use a Domain address rather than free email clients - I strongly suspect that using one to register may raise a red-flag in Amazon’s Risk Assessment Analysis protocols.

Based upon the evidence that our friend Philip has presented, I suspect that our friend @idpsales has squarely hammered the actual work-piece resting upon the anvil in asserting that the root problem here lies in a failure to correctly comprehend what Amazon requires for the New Seller SIV process - and by creating multiple Cases with SeSu seeking succor without reference to propriety, I suspect that Amazon may have decided they are not a good fit.

A couple years ago I started to think of them in the sense of a presidential speech, with well timed pauses. Sometimes, even, using 2 in a sentence.

I’m probably wrong though, usually am.

A couple years ago I started to think of them in the sense of a presidential speech, with well timed pauses. Sometimes, even, using 2 in a sentence.

I’m probably wrong though, usually am.

From kindergarten until I graduated High School, I went to 8 different schools. Somewhere in that moving around I never got a good foundation in grammar. Nor did I ever get a chance to study History during the WW1 and WW2 eras. I always felt a bit gypped. In college, I was excited because I was going to get to take a history class in that era from a super professor and then a specialized class I was in, was in conflict with the time of the class so I had to change. But through reading, I have managed to sort out a lot of the history. The grammar not so well. In 11th grade, we had a student teacher who was supposed to be teaching grammar but she could never answer a question that I asked of her! I do appreciate spell checks and grammar checks and I don’t know why people don’t use them more often. If they want to slaughter the English language in personal letters, email, and texts to friends, go for it. But, if you want to show yourself to be professional you need to pay attention to your spelling and grammar, although some think they don’t have to and that the rest of the world has to get used to how they write. I don’t know if you are old enough to remember the term, “If you don’t like it lump it!” which is what they are saying. I’m waiting for computers to start allowing girls to put hearts and smiley faces above all the small “I’s” that they use just like they did in Junior High.

These are not the bots you are looking for

I’m waiting for computers to start allowing girls to put hearts and smiley faces above all the small “I’s” that they use just like they did in Junior High.

Thank you for the visual,it brought a good laugh!

Oh dear, there I go using too many commas again!

I actually put about 5 commas after the word visual up there ^, but only 1 appeared in the post–and the space after them didn’t show up either. Ugh. Now I can never come back here, because it will drive me crazy seeing it.

No OCD or perfectionist tendencies here, not at all…