Amazon should let us sell masks

thats bunch of BS and excuses. If you look at the list of N95 certified masks as per SDS (cdc: NIOSH-Approved N95 Particulate Filtering Facepiece Respirators), half of them from China. Heck, most hospitals use chinise masks in USA in normal time. If your supplier can not source you N95 mask then its your issue, and if seller is a crook who trying to scam people, then Amazon should deal with him, but i see no reason to lock the listings completely for everyone. It feels like they want to limit supply so few who have listings can make more money elluminating competition.

Actually, they could. If it was FBA only, and Jeff had a hand picked team to look at every box that came in, they could be moving tens of thousands of masks per day.

A handpicked team to inspect every single item that comes into FBA? In all 175 Fulfillment Centers? They can’t even handle the products they have now. Some items in FBA are delayed by up to a month. Maybe if they were a non-profit and had 18 months to create the infrastructure, tens of millions of dollars to devote to the cause and a a year to hire and train the experts. Even then, they would lose millions of dollars and by the time it was all set-up and the masks were coming in we’d already be done with the second wave of COVID-19 in 2021.

There are way to many regulations when dealing with medical supplies and the liability on the other end is enormous. Amazon does not want to be the focus of a congressional inquiry in 2021 and we all know that they are going to look for someone to go after. They always do because it makes for good politics.

Amazon is blocking the sale of certain items to protect their business. It’s that simple. They are not going to open it back up and allow sellers to offer masks and expose themselves to that kind of liability. I agree that it would be great if they could figure out some way to allow sellers to offer masks and other items but I just don’t think it’s feasible without opening up the floodgates to scammers and rip-off artists.

We’re not talking about a few hundred or even a few thousand sellers. It would be total chaos with millions of listings. Look how bad the catalog is now. Just imagine if 100,000 or more sellers from across the globe could start offering PPE’s during this pandemic. They are completely overwhelmed now. Blocking sellers from sending in non-essential products which has devastated 1,000’s of Amazon based businesses (many of which won’t recover). They can’t even ship the items they have in FBA now. To imagine with all the chaos going on that they’re going to magically fly in 1,000’s of experts to inspect masks? They can’t even hire enough “Bob’s” (aka: Bob the warehouse worker) to put items in poly mailers and slap mailing labels on them.

We’re got a serious supply chain problem right now in the US when it comes to PPE’s but it’s a problem that has to be solved by the government. That’s their job. That’s why we pay taxes and vote and live by their rules. In return they deal with problems like pandemics. Amazon is not going to solve the pandemic. They may be able to source some masks and donate them (like Apple did) but they’re better off just focusing on getting their own house in order so people can order things they need right now that aren’t deemed “essentials” by Amazon.

sterility is not the issue

China is producing most of the N95 masks. Sterility could be an issue in the production of masks at this time of widespread Covid-19. Apparently the N95 masks can’t be washed and still be effective.

Cloth masks are available on Amazon made of polyester or cotton. Some have PM 2.5 filters that can be inserted beneath the cloth. Cloth masks can be washed and resused. Some might not be as effective as an N95 mask but it does offer some protection which is better than none.

Sterility could be an issue in the production of masks…

There are at least two sources of masks being discussed in this thread:

When I said that sterility was not the issue, I was referring to the CBP stockpile. It was in response to an incorrect claim that ‘expired’ masks are considered expired because they are no longer sterile.

My comment was not intended to be applied to the other source of masks.

FWIW, I would agree that the sterility of masks imported from China is uncertain.

The consensus among experts abut the use of masks by healthy non-medical people seems to be shifting.

It is better for consumers to have the access to face masks than not. China, Taiwan, and Japan showed much less new cases once everyone is on masks.
I agree Amazon should allow seller to sell, with certain guidance, such as CE or FDA approved on the packaging, let the market adjust to the demand and supply, it is better to spend small amount of money on masks than getting sick and cost much more money to treat and recover.
If people can buy and sell on Amazon, it would allow consumers the convenience to have them without going to pharmacy to get them which is not available anyway.

I take it you haven’t noticed that Google has shut down the ability to advertise for many masks. Just search for “N95 mask on Google”. No paid results, store shopping or anything! So how are you supposed to drive traffic to your own site?

cant there be a substitute for elastic??? I realize it sucks, but maybe some hybrid of velcro?? Just a thought…

it is so amazon can be the only seller of masks.

Only amazon wants to sell the masks. Simmer down.

I see good points but one overrides everything else…Amazon wants to protect itself from becoming the “gouge platform” in consumer’s eyes and any actions that help it avoid that reputation benefits all sellers here.

Hopefully other platforms can pick up the slack, for public safety’s sake, until Amazon finds a better solution though.

My friend is sewing some that tie so no need for the elastic. There is a pattern out there somewhere for it.

Lots of potential issues with this. In addition to the obvious health/legal issues Amazon isn’t able to handle the shipment volume they already have. Also, while masks provide some protection to healthy people in the general public mostly the key is having sick people and people dealing with them wearing masks.

One of the problems with people making masking, and please understand that I am not opposed to it, a homemade mask is better than no mask at all. I got an Amazon question the other day concerning embroidery stabilizer that the person wanted to know if they could be used in face masks? Well technically they could, but what for? If in their head they are thinking that the stabilizer will act as a filter, who knows. It certainly isn’t something you can guess on and no stabilizer company is going to say yes without testing and if it is usable are they really going to say so? So that home sewers can make up face masks without oversight and then state that they can filter out viruses. Home made face mask take away the quality control that a factory would be putting into them. The surprising thing for me, was another person that was asked the question said yes and left it at that. I’d love to know where they got the facts that using this would in anyway help the masks be able to filter viruses. Especially on masks that it is unknown who would be using them. As a nurse, I would feel much safer using an expired face mask being held for who knows why by the US than trusting my life to a homemade face mask using embroidery stabilizer as the filter part if that is what they are thinking to use it that way. 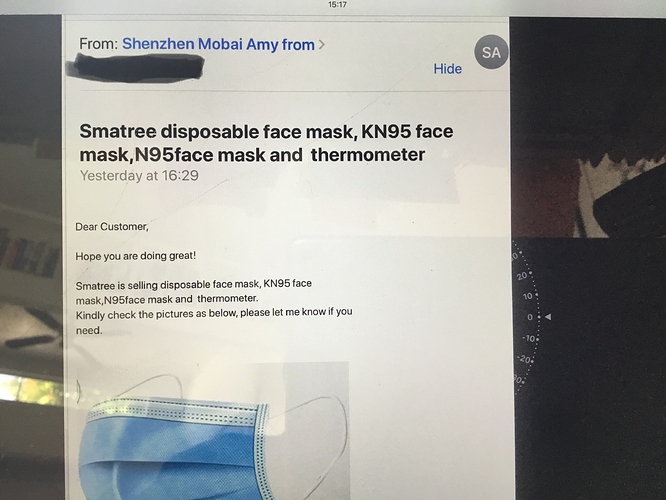 Amazon will just want to sell for themselves and do not want to share that revenue with sellers.

Anyone with masks should have donated them to the hospital already!