All I Wanted Is Some Ginger Ale

I never think about diet ginger ale but someone mentioned it to me a few months ago and I checked on Amazon Prime and they were selling a 12-pack of 12-ounce Canada Dry cans for $3.50. This wasn’t any third-party seller, this was Amazon itself. I figured I might enjoy it for a change. So I ordered a couple on October 4. Then I got an email saying that they were temporarily out of stock but they would get it to me soon.

I figured this was the typical Amazon pricing error and after a few months they would cancel the order on me. But a few weeks later, it was back again at the same price. So I ordered three more on October 31. Again, temporarily out of stock.

By now you know where this is going. I knew I was already defeated but I started an online chat with some CSR and asked if I could just pick it up at Whole Foods, if I found it there. Of course not, I was informed. There is no connection between Amazon and Whole Foods. Well, not that kind of connection.

So now I find that it is being sold by “Amazon Fresh” for $4.58. That’s still a decent price, but if it’s already in the warehouse, why can’t they fill my order? (And I don’t want to put together a $30 order.)

I think what I like about Amazon is no matter how big it grows and how wealthy its founder becomes, it still acts sometimes like someone shipping stuff from his garage, and not quite having a system that works.

You should try Blenheim Ginger Ale; looks like the names have changed since I was buying it, but try the “Not so hot”. Be warned, even with the milder version, you’ll probably want a chaser!

Not cheap, but worth experiencing at least once.

Now, if I could just find Canada Dry Wink…

Fentiman’s ginger ale is the best.

Blenheim and Wink… I get the strangest feeling you’re from the Carolinas.

Well that’s confusing as Squirt on the west coast is very much a different thing, a tart drink that I’d describe as artificial grapefruit juice flavored. 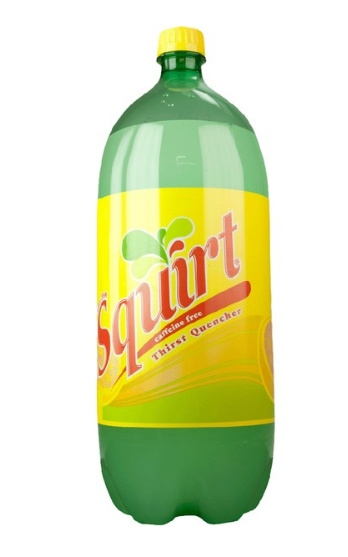 Squirt is kind of a bad choice, it’s loaded with high fructose syrup… I only do regular sugar…

Dr. Brown’s has an entire line of soda only using real sugar…

Waiting about six months now for a book which was out of stock. Beginning to think about printing it myself.
Dwight

Does ginger ale even have any ginger in it???

Yep, Vernors–that’s the ticket! They make a good cream soda as well. On those occasions that it can be found.

I no longer drink soda, but keep ginger ale around for the occasional illness. Just because a cold ginger ale tastes good when sick (probably due to nostalgia)–there doesn’t seem to be any ginger root in it these days (though they claim it is within the ‘natural flavoring’). Actually there doesn’t appear to be anything that would be considered ‘healthy’ in it.
Fortunately, ginger root can be purchased in capsule form when desired for nausea specifically. Or the actual root can be made into a tea–if you can stand the taste of it.

Edit: I just discovered there is a drink that does contain ginger root–Reed’s Craft Ginger Beer. Sounds like the perfect remedy for feeling ‘under the weather’.

Vernors is good, but stronger flavor than Canada Dry. I like both but find Canada Dry better for an upset stomach. Vernors is good for an ice cream float.
Seagrams Ginger Ale is a similar mild flavor to Canada Dry.

At most of the Asian markets they have these kind of gummy Ginger drops, that are really helpful for a wonky stomach…

I think along with some freshly squeezed lime, a bottle of vodka from the freezer , a tad bit of crushed ice & your favorite ginger ale everybody’s probably ready for a Moscow Mule. …

I’m thinking maybe I could peel & chop some fresh ginger & put it in vodka to infuse it?.. cocktails anyone?

Until last week, i had been waiting for 6 months for a 35 cent packet of ramen that I literally added to my order just to get free shipping. I had to have a supervisor cancel the noodles for me because the agent beforehand told me he was going to make sure I was retroactively charged for the shipping costs on the rest of my order that had arrived months prior.

You’d think this wouldn’t happen again, but I bought some Lays Stax to get free shipping on a book. The book is arriving Monday, but the chips, which i am looking at the page for and it still shows readily available and in stock - February 29th…

That’s crazy! I’ve been noticing a difference in the ‘customer centric-ness’ in recent months. Just sayin’…

I waited three months, for this to ship: Amazon Just Undercut Me and Posted Temporarily Out of Stock - Unfair.

Amazon kept canceling after 30 days and I kept reordering, beginning in December 2017…

All I Wanted Is Some Ginger Ale

…And only half full.
Fill the other half for the pitcher with ice cold vodka and I am your buyer for life…
I will be honest with you. I will not touch it in the morning. (At least not most mornings.) That time I am supporting sellers that have strong coffee.
But I am your man from 12:00 noon on until my lights are out…

I just bought a big bag of ginger at Costco, with the thought being I’ll make a super-concentrated syrup to use to make ginger beer with the Soda Stream. We’re always trying to amp up our Moscow Mules.

It might be time to step back and split your time between North American ginger ale and its British cousin, or ancestor, which has much more ginger flavor, and much less sugar.

Speaking of imported beverages, the last one I tried was tarkhoon, which is a tarragon-flavored soda popular in Russia, Ukraine and elsewhere in Eastern Europe. Yes, I said tarragon. It has a vaguely licorice taste.

I do want to thank Amazon for the free pasta. They have a web page for Mantova Italian Bronze Die Spirali Pasta, an Italian import. A dozen 16-ounce bags for about $12. I ordered it, and they sent me just one bag. The options (at least the convenient ones, without talking to management) were to send it back for a refund to my credit card, or keep it for a refund to my Amazon buyer account. Other customers had the same experience. The page is still up but your results may be different.

They did this to me with toilet paper. I was buying the amazon brand tp for cheap and stocked up on it. When I went to restock my cabinets I ordered and the next day it said order cancelled cannot be delivered to address. It not only took over a week for them to actually refund but I couldn’t order that type of tp anymore because it was now labeled amazon fresh which we don’t have it the boonies. Side note, I love the amazon brand ginger sparkling water. It’s unsweeted and gingery, however I never get the full 12 pack. Amazon doesn’t pack it with bubbles so when it gets here my letter carrier always drops it on the porch breaking open a minimum of 2 cans. I’ve ordered it about 5 times and literally not once gotten an intact case delivered.

Hmm, I saw them today as well…

So I came across this seller today General Selling Questions

I see them today… love their prices!!! [AZFRESH]